Wine made from sprouted brown rice

The name of the rice wine came from a sommelier’s first remark, “It tastes like a mature white wine,” upon blind-tasting it.
The rich and full aroma carries a hint of refreshing youthfulness. After a sip, the dry flavor mixed with spiciness fills the mouth. It can complement a wide range of dishes.
A particularly good match for Italian, ethnic, and Chinese dishes. Enjoy on the rocks or mixed with tonic water.
Sake(Rice wine) made of sprouted brown rice
alcohol content : 17%~18%
Sake metre value (SMV) : +6.5
Acidity : 2.7
Amino acidity : 1.4
Rice-polishing ratio : 100%
Ingredients : Sprouted brown rice（Okayama prefecture,Japan)
Sprouted brown rice Koji（Okayama prefecture,Japan)
Net Contents : 300ml 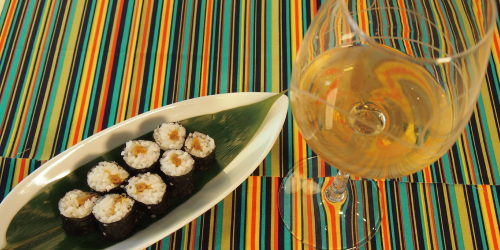 No weariness lingers on the next morning.
FABALA’s alcohol contains almost three times more amino acids than ordinary liquors.This is possible because of our proprietary technology to combine oil and water without any intermediates, on which FABALA’s products are based.
Did you know that our body requires amino acids to decompose alcohol?  The analytic result by an analysis company shows the presence of amino acids in FABALA’s germinated brown rice wine, which, compared to ordinary Japanese sake, is significantly high in amount.
Amino acids are known for their function to decompose alcohol, and acids like alanine, glutamine, valine, leucine, isoleucine, and arginine, are said to be particularly effective.